Ok guys, HERE IT IS, my Homemade Cinnamon Rolls Recipe! I’m pretty sure this is the most anticipated recipe I’ve hyped up in a very long time–and for good reason! These Cinnamon Rolls are absolutely heavenly and I’ve been working hard, making over 200 cinnamon rolls, trying to get this recipe as delicious as possible. SO SO thrilled to be sharing this recipe with you all today!

Okay, friends, let me get you ready for this. While this list may seem a little long, it truly is the bare basics. Lots of pantry staples! Most of you will already have the main ingredients needed for Homemade Cinnamon Rolls. Here’s what you’ll need:

For the Cinnamon Sugar Filling

For the Cream Cheese Frosting

How to Make Cinnamon Rolls

The biggest thing you need to remember when making homemade Cinnamon Rolls is to have patience. Nothing about this recipe is hard per say, but there are a lot of steps. Keep with it! You can absolutely follow this recipe and end up with a pan of Cinnamon Rolls just as beautiful as mine! I give you lots of directions below, but there is a whole lot more in the printable recipe card at the bottom of this post.

Start by proofing the yeast in warm water with a sprinkle of sugar. Next, add in half the flour, more sugar, buttermilk, canola oil and egg. Knead by hand or use the dough hook attachment on your stand mixer.

Once everything is incorporated, slowly add in more flour bit by bit until the dough pulls away from the sides and the bowl looks clean. You might not use all the flour and THAT’S OK!! The dough should be sticky but not sticky enough to stick to your fingers when touched. You might use the full 4 1/2 to 5 cups of flour or you might not. Just keep watching for these visual cues.

Knead 5 minutes on low speed. Once the dough is all kneaded, transfer dough to greased bowl, cover with plastic wrap and a dishtowel and rise 2 hours or until it has doubled in size. It is a very enriched dough, so it might take longer for it to rise. That is fine and normal!

A Note About Enriched Dough

This Cinnamon Roll Recipe uses a highly enriched dough. What is enriched dough? Basically a bread dough that is made with more than just the basic water, yeast, salt and flour. The additions of butter, buttermilk, sugar and eggs make this an enriched dough. Why is that important to know? Enriched doughs inhibit yeast growth which means this dough will take longer to rise than a typical bread dough. It will grow! It will just take longer. I recommend either using rapid rise yeast or doubling your active dry yeast to get things going.

Once the cinnamon roll dough has doubled in size, roll it out on a floured work surface to be a 20×30 inch rectangle…or as close to it as possible.

Stir brown sugar, cinnamon and cornstarch together in a small bowl. This will be your filling.

Spread softened butter across the flattened dough, leaving a 1-inch strip across the bottom untouched. Dump the filling onto the butter and spread it around to create an even layer. Lightly press the sugar into the butter with a rolling pin. Roll the dough towards you, ending with the plain dough on the bottom of this log.

Cut log into 2-inch cinnamon rolls and place into greased baking pans. Cover and rise 1-2 hours or until they are double in size again.

Bake at 350 degrees for 17- 20 minutes. You’re going to want to watch these so they don’t over bake. Once the tops start to brown, they should done.

While rolls are baking, make the cream cheese frosting by mixing all ingredients together until smooth and shiny.

Pro tip: If you want your frosting to look more like Cinnabon, whip it 5-7 minutes or until it lightens in color.

Once cinnamon rolls are done baking, slather on about half the frosting to the warm rolls. After they have cooled, slather them again with remaining frosting. HEAVEN!

Can I substitute Margarine for Butter?

Yes, you absolutely can easily substitute butter for margarine in this cinnamon roll recipe. Cinnabon lists margarine on their ingredients list, so that is why I use it from time to time, but most households probably would prefer butter.

Why do you use Cornstarch in the filling?

I know cornstarch is a totally random ingredient, but it helps hold the filling in the cinnamon roll instead of oozing out while baking. It still oozes, but not nearly as much. (Cinnabon actually uses a chemical/food gum to help it not ooze which is REALLY appetizing I know.)

Do I have to use Corn Syrup in the frosting?

Nope, you don’t have to use it! It does add a nice shine (and is found on that darn Cinnabon list of ingredients as well) so I like to use it, but it won’t ruin your cinnamon rolls if you simply omit it.

My Cinnamon Rolls didn’t rise! What did I do wrong?

Cinnamon Rolls NOT rising (or rising really slowly) could be caused by a number of reasons. Your yeast was not fast-acting, your yeast was old, you kneaded in too much flour, your kitchen was on the colder side, etc. etc. If you’re really concerned about it, simply double the yeast to have some extra insurance. These rolls are made with a very enriched dough (see my note above about enriched doughs) which make it a slow rise. This is totally normal! Again, if you’d like to speed things up, simply double the yeast.

Can I over knead my dough?

Kneading dough in a stand mixer is an efficient way to make any kind of bread dough, however, it can get *too* efficient and there is a tendency to add in too much flour. It should still stick to the bottom of the bowl, but pull away from the sides. Also, when you feel it, it should be tacky but not enough to stick to your hands and leave a residue. Kneading the cinnamon roll dough by hand is a great way to ensure the dough doesn’t get over kneaded.

My rolls are still raw in the middle after baking! What did I do wrong?

Typically, cinnamon rolls stay raw in the middle for two reasons: (1) they were rolled too tightly and never had a chance to rise in the middle OR (2) they need more time in the oven to bake. How do we fix this? Roll your cinnamon rolls to be tight enough to maintain their shape, but not so terribly tight that the dough can’t rise. Practice does make perfect! Also, be sure to make your rolls in the bottom third of the oven.

Can I make Cinnamon Rolls ahead of time?

Yes, you can!  Follow the directions up until letting the dough rise after filling and rolling them. At this point, you can store them in the fridge overnight if you are making them ahead of time.

To make them the next day, bring them up to room temp and let them rise before baking. (After I took the pan out of the fridge, I let them rise 4 hours. It takes a while to take the chill off.) After that, prepare the icing and follow the directions as normal.

If you enjoyed this recipe as a breakfast treat, you’re going to love my other sweet breakfast recipes! Here are some of my favorites:

So, there you have it! The Best Homemade Cinnamon Rolls! Hopefully, you’ll all find a few hours to make these! They are TOTALLY worth the wait! 🙂 Have a great day! 🙂 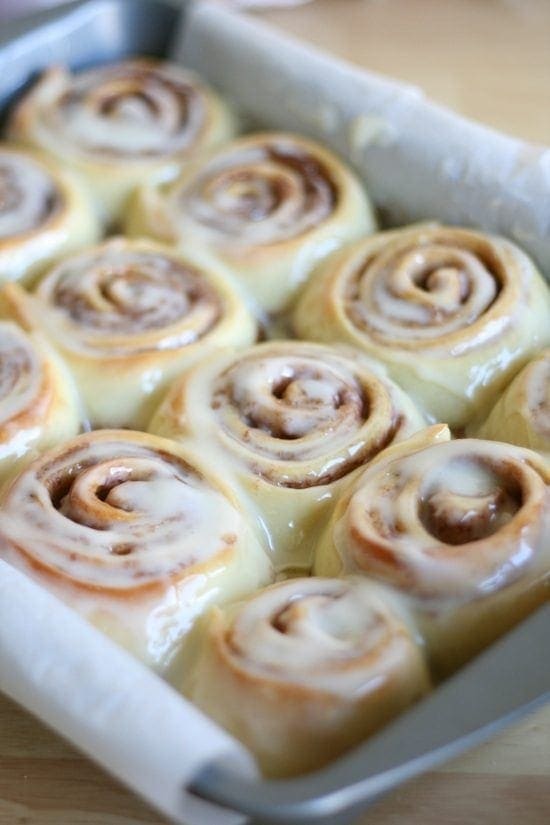 *I use Red Star Platinum Yeast (rapid rise kind). Feel free to double the yeast in this recipe to ensure a good rise, especially if you’re working in a drafty kitchen. -See step by step photos for more details. -If your frosting isn’t quite ready after you pull the rolls out of the oven, cover with foil so the tops don’t dry out and get crispy.